The following is an in-depth examination of the conversion of cylindrical gears in the AGMA system to ISO standards with the addendum modification coefficient.

The rational use of the addendum modification coefficient is one of the topics better known by specialists of gears working in the metric system (ISO). This non-dimensional parameter, also well-known as rack shift coefficient x, allows gear designs with very good adaptability of the teeth profile in practical applications.

Unfortunately, the gear specialists with designs based on the AGMA system traditionally don’t appreciate the advantages of the addendum modification coefficient as an adjustment factor between ISO and AGMA systems. The publications of specialists [McVittie (1993), Rockwell (2001)] directed toward disclosing the generalities of the geometry calculation of gears with the application of this coefficient are welcome for experts.

The Working Group WG5, under the direction of Henry Deby, approved in 1981 a Technical Report ISO (ISO/TR 4467) with orientations about the value limits and distribution of the addendum modification of the teeth of external parallel-axis cylindrical involute gears for speed-reducing and speed-increasing external gear pairs. Although the recommendations were not of a restrictive nature, a general guide was finally published on the application of the addendum modification coefficient. These recommendations were important in order to avoid an incorrect use of this coefficient and to prevent designs of gears with very small tooth crest width, insufficient value of transverse contact ratio, or cutter interference. Unquestionably, ISO/TR 4467 showed the advantages of using the addendum modification coefficient in the design of gears and gives guided reasonable values of this coefficient for the geometric calculation of gears with more load capacity and better performance.

Tooth Profile Reference with No Addendum Modification on Cylindrical Gears

It is well known that when external parallel-axis cylindrical gears with an involute profile are in correct meshing the toothed wheels should conjugate with a corresponding rack. The profile of this rack-tool is denominated basic rack tooth profile. The shape and geometrical parameters of the basic rack tooth profile for involute gears are set by special standards (see Table 2) along with the rack shaped tool, such as hobs or rack type cutters, used in the cutting of gears by means of generation methods (see Figure 1).

The usable flanks in the basic rack tooth profile are inclined at the profile angle a to a line normal to the datum line. This angle is the same as the pressure angle “a” at the reference cylinder of a spur gear or the normal pressure angle “an” at the reference cylinder of a helical gear. The relation between pith of the basic rack tooth profile “p” and module “m” (in mm) is: p = p ° m

The dimensions of the standard basic rack tooth profile are given in relation to module and identified by *, such as ha* (factor of addendum), hf* (factor of dedendum), c* (factor of radial clearance), and rf* (factor of root fillet radius). The module m of the standard basic rack tooth profile is the module in the normal section mn of the gear teeth. For a helical gear with helix angle b on the reference cylinder, the transverse module in a transverse section is mt = mn/cosb. For a spur gear b = 0 the module is m = mn = mt. As a reference parameter, the module m in ISO standards is similar to the normal diametral pitch Pnd in AGMA standards and can be converted by the following equation:

The principal methods for generating the tooth flanks on external parallel-axis cylindrical involute gears make use of a rack-shaped tool (such as hobs or rack-type cutters) with dimensions similar to the basic rack tooth profile shown in Figure 1. When gears are produced by a generating process, in the case of tooth profile without addendum modification the datum line (MM) of the basic rack tooth profile is tangent to the reference diameter of gear (see Figure 3).

It’s possible to understand the use of the tooth profile without addendum modification to establish the first standards for the geometric calculation of cylindrical gears. When gears are generated with a rack-shaped tool and the reference cylinder of gear rolls without slipping on the imaginary datum line, the standard relationship to set up the tooth shape and geometric calculation are relatively simple.

For specialists involved with gear design based on ISO standards, it’s often true that the datum line of the basic rack profile need not necessarily be tangent to the reference diameter on the gear. The tooth profile and its shape can be modified by shifting the datum line from the tangential position. This displacement makes it possible to use tooth flanks with other parts of the involute curve and different diameters for gears with the same number of teeth, module, helix angle, and cutting tools.

Explained simply it can be said that the generation of a cylindrical gear with addendum modification, when concluding the generation of tooth flanks, that the reference cylinder is not tangent to the datum line on basic rack tooth profiles, and there is a radial displacement.

The manufacturing of the gear with addendum modification is not more complex or expensive than gears without profile shift, because the gears are manufactured in the same cutting machines and depend solely on the relative position of the gear to be cut and the cutter. The difference can be evident in the blanks with different diameters and tooth profiles on gears.

The choice of the sum of addendum modifications could be arbitrary and depends on the center distance or the operational conditions applied. Sums that are too high for positive values, or too low for negative values, may be harmful to the satisfactory performance of the gear pair. For this reason upper and lower limits are specified in the function of the number of teeth (or the virtual number of teeth for helical gears). In Figure 5, recommendations for limits of sum of addendum modification coefficients are given. For a sum of addendum modification coefficients Sx with a correct distribution of values between a pinion and gear, it is possible in a gear pair to realize favorable effects in the ability to balance the bending fatigue life, pitting resistance, or minimizes the risk of scuffing.

Addendum modification coefficient for gears with a small number of teeth to avoid undercutting on the pinion.

Value of addendum modification coefficient inversely proportional to the number of teeth.

Value of addendum modification coefficient according to MAAG:

The basic geometry of the external parallel-axis cylindrical involute gears, taking into account the addendum modification coefficients that can be calculated with the formulas found in Table 3.

To illustrate the application of the addendum modification coefficient in the solution of practical problems in the adjusting gears from the AGMA system to ISO standards, two samples of practical cases are shown. These cases cover the most frequent geometrical problems faced by gear experts during the conversion to the ISO Standard of helical and spur gears manufactured with AGMA standards. Cases with spur gear are more difficult to adjust due to the fact that the helix angle is fixed and can’t be modified. Other cases can be taken into account by a similar approach.

Case 1: Setting gears from AGMA to ISO with determination of the sum of addendum modification coefficients for a given center distance and gear ratio.

• Statement of the problem—In the gearbox of the power transmission system of a heavy truck it was necessary to recover a spur gear transmission cut originally with tools based on AGMA standards. For the new manufacture cutting tools based on ISO standards should be used. The basic solution is as follows:

a) Proposal of module (ISO).

c) Number of teeth for pinion and gear.

Approximation is preferable by defect.
d) Pressure angle at the pitch cylinder.

f) Addendum modification coefficients for pinion and gear (several criterions to distribute the coefficients can be used, but always keep the calculated sum).

Case 2: Setting gears from AGMA to ISO with determination of the sum of addendum modification coefficients for a given center distance, keeping the same number of teeth and gear generation using a cutting tool with a smaller pressure angle than the original.

• Statement of the problem—In the final drive of earth-moving equipment it was necessary to manufacture a pair of spur gears originally manufactured under AGMA standards. Gear generation should be done by means of a cutting tool based on the ISO system and a pressure angle of 20°. The operator of the hobbing machine proceeded to cut the gears and observed an undercutting on the pinion not present in the original. During the study of the original pinion it was established that the original generation of the gear was made with a cutting tool with a 25° pressure angle. The challenge in the new design supposed engineering calculations with a cutting tool with a 20° pressure angle to guarantee the original center distance and number of teeth without undercutting on the pinion. The basic solution is as follows:

a) Proposal of module (ISO). 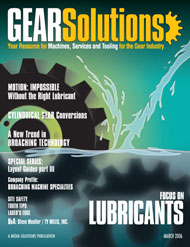 You Say You Want a Lubrication Revolution?