Current AGMA standards provide information about the calculations of loose gears and gearbox components, with recommendations primarily based on the “traditional” methods of mechanical engineering. However, new methods for calculations of mechanical engineering components like FEA (finite element analysis) are becoming widespread. Once these techniques were only used by big companies due to their complexity and price, but with the development of computer technology they have become more and more accessible to small gear companies, which are the majority of participants in the market.

In today’s market even a small gear company usually possesses a modern CAD system, which always includes a basic or advanced FEA package. Such CAD systems are most often run by one gear engineer who makes 3D models, engineering calculations, and production drawings. The level of the FEA package is such that it allows the gear engineer to be able to do component calculations without deep knowledge of the FEA process itself.

So the question about the effectiveness of the traditional AGMA calculations and the new FEA methods becomes of vital importance, particularly for small firms. This paper compares AGMA with FEA strength and deflection calculations of spur gears and gearbox components, and it draws conclusions and provides recommendations about their effectiveness in the environment of a small gear company.

The AGMA standards [1] mentioned previously provide a lot of information about the calculations of loose gears and gearbox components such as shafts, splines, and keys, etc. These recommendations are primarily based mostly on the “traditional” mechanical engineering methods found in many classical textbooks and research papers. Their accuracy and reliability have been proven during many years of gearbox design and field tests. They are clear, concise, and in most cases easy to program and apply even by a small gear company with limited resources. Though the AGMA standards and information sheets are an excellent source of gear information, they are not recommended for beginners.

A new method — Finite Element Analysis (FEA) — is used extensively nowadays for calculations of the strength and deflections of mechanical engineering components. It was once used by large companies alone because it was complicated and expensive, but with the development of computer technology small companies—which make up the majority of participants in this particular area—have begun to gain access. Almost all FEA manuals require simplification of the parts. This approach is very dangerous for gearbox components, where the part features are very close to each other and every one of them usually influences the stress concentration of the other and the whole part. The proper modeling of the gearbox parts and assemblies requires mesh refinement, which needs a lot of computing resources not always available to the small firm. It is common during the calculations to get a message that there is not enough calculation power, especially if the convergence process is used. Apart from the mesh refinement the finite elements themselves require special attention, which is usually beyond the scope of the gear engineer’s knowledge. The FEA has its own inherent errors for each of its stages—modeling, discretization, and solution [4] — and that’s why it is recommended to only be one of the methods for engineering design.

These days even small gear companies are usually in possession of a modern CAD system [3]. As mentioned, these always include a basic or perhaps even an advanced FEA package. These CAD systems are usually utilized by a single engineer who is responsible for creating 3D models and engineering calculations, as well as production drawings. The technological level of the FEA package will allow engineers to calculate components, even if they lack an in-depth knowledge of the FEA process. So the effectiveness of the traditional AGMA calculations versus the new FEA methods becomes of vital importance, particularly for smaller firms.

Comparison of AGMA and FEA Calculations

Table 1 shows the direct comparison of the capabilities of AGMA standards and information sheets and FEA to calculate gears and gearbox components. It also suggests that FEA is superior to AGMA and should be used extensively. However, it is necessary to remember that FEA has its inherent errors, as mentioned previously, and the AGMA calculations are empirical and proven by field experiments. It is sometimes very difficult to make direct comparison between the two methods. In most cases, AGMA calculations are fatigue calculations based on proven fatigue data. Only high level FEA software is capable of doing fatigue calculations. This paper considers calculations that can be compared by both approaches such as gear teeth, shafts, and splines. Keys and bolts calculations are not considered due to space limitations.

The gear geometry must be modeled properly in order to use FEA for the strength calculations and deflections of the gear teeth. In the popular gear literature there are examples showing how to do that [5]. The most difficult part is the modeling of the contact area of the two gears. The easiest way is to calculate the contact band [5] and present it as planes on the gear teeth, however this calculation is not given in the AGMA standards. Then these planes can be easily mated in the CAD software, and the calculations carried out. Figure 2 shows a band of contact equal to 0.3mm.

The FEA strength calculations — the meshing, the loading, the contact area, and the stress numbers — are shown in Figure 3. It seems that the contact stresses are very high. However, if we look carefully at the stress distribution on Figure 4 we see that those high stresses are only in certain small areas, close to the edges of the band of contact. This is definitely due to errors in the model, with repair methods usually being beyond the knowledge of the gear engineer. But looking at the surrounding colors we see that the stresses are close to those predicted by the AGMA software (Table 2).

AGMA does not have a procedure for determining the gear deflections except for the tooth deflection in the gap analysis of AGMA 927-D07. Keeping in mind that AGMA predictions allow for about 25 percent scatter of the results, we can conclude that both methods give close results. Figure 5 shows bending stresses of the pinion, which are very close to the AGMA numbers (Table 2).

In light of the preceding discussion, certain conclusions can be made:

• It is not always easy to make direct comparison between AGMA and FEA calculations due to the different nature of both methods;

• Whenever direct comparison is possible, AGMA and FEA methods give similar results;

• The AGMA and FEA calculations give comparable results for the contact and bending strength of the gears. However, the bending calculations should be considered more reliable due to the controversial approach of modeling the contact between the gear teeth;

• The AGMA standards and information sheets should be preferred by the gear engineer for the calculations of the gears and gearbox components because he/she has deeper knowledge of them than FEA.

• FEA calculations should be preferred for deflection calculations rather than for strength because deflections are easier to calculate, and besides AGMA has a limited number of such methods;

• FEA calculations should be used where AGMA does not have similar methods;

• Whenever necessary, an FEA consultant should be involved and calculations should be done with higher level of FEA software;

• Gear engineers should be strongly encouraged to increase their competence in FEA in order to quickly size gearbox parts for which AGMA calculations are not applicable and to improved communication with FEA engineers. 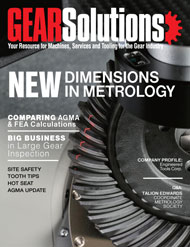