A wide variety of different types of polymer materials (such as PA and POM), different reinforcements (such as fibers and nanoparticles), and internal lubricants (such as PTFE) can be used to tailor a polymer for a specific application. However, due to the large number of different material combinations possible, it is difficult to make an optimal material selection for a certain gear drive.

In the literature and guidelines, the allowable gear endurance limits (for root and flank) are mainly given for PA and POM materials [2, 6]. Only a few attempts have been made to compare the permissible endurance limits from the guideline with the results obtained from gear testing [5, 7]. The common conclusions are that great discrepancies can exist.

In order to appropriately design gears, it is, in most cases, advisable to perform gear testing in order to evaluate material selection, gear temperatures, as well as permissible root and flank stresses. As this can be expensive and time-consuming, it is recommended to combine standard tests with accelerated test procedures.

To determine the polymer gear endurance limits with acceptable testing times and costs, an accelerated testing procedure is proposed. The method was tested on polymer gears made of unreinforced and reinforced polyamide 6 (PA6, PA6-30) and polyacetal (POM) materials under different testing conditions (up to 2,500 rpm and 0.82 Nm). The test results from lifetime testing (permissible root stress and gear bulk temperature) were compared also with the values described in the VDI 2736 guideline.

To have an efficient testing procedure, a balance needs to be found between reliability of the results and the testing time. A proposed testing method for polymer gears can have two types of tests: tests with step increased load and lifetime tests. Such testing can lead to a reduced number of tests and provide reliable test results for different applications.

When running tests with increasing step load, the tangential speed in the test must be similar to the tangential speeds expected in the final application. The load during the test is increased in steps. Starting load (or equivalent tooth root stress) should be determined with preliminary tests. For PA6 and POM materials, the tooth root stress for the starting load should be between 15 MPa and 20 MPa at ambient temperature. This is selected based on expected permissible tooth root stresses that are presented in the VDI 2736 guideline. The torque increase in each step test should be around 20 percent of the initial load. The duration of the test at one load level is determined based on the temperature of the tested gears. The duration must ensure that the gear temperature is stable before moving on to higher loads. The authors suggest testing for at least 2·105 cycles before increasing the load level. The load level is increased until one of the gears fails, either by temperature overload, fatigue, or excessive wear.

In case the first result does not fulfill the requirements (temperature is not stable, gears immediately fail, or high wear occurs), the step load test is repeated using a pair of gears made from different materials or with some other modification, such as changed load step procedure or modified center distance [8].

The purposes of the tests with step increased load are:

If more data is needed about a certain material combination (or material), lifetime tests should be performed. Lifetime tests are performed at constant load and constant speed. Usually at least three different speeds and load levels are used. With this type of testing, S-N curves are generated. Compared to the tests with increased load, the time to complete lifetime tests is significantly longer.

The purposes of the lifetime tests are:

Tests were performed on a purpose-built, open-loop testing machine, which is schematically shown in Figure 1. The test rig consists of a brake shaft and torque shaft. Braking torque is provided by hysteresis brake (maximum 1 Nm), while the speed is controlled with servomotor (maximum 4,000 rpm). The motor and brake are connected (via coupling) to the shafts on which the driver/driven gear is mounted. The design of the test rig allows precise positioning of the test gears in x and y directions.

A thermal camera Flir A320 (Flir, USA) was used to measure the temperature of the driver gear. The bulk gear temperature was measured from the side of the gear as shown in Figure 2. The area of temperature measurement was 2 mm x 1 mm. The emissivity of the test gear materials was measured and was set to a constant value of 0.95. The same gear body temperature was assumed for driver and driven gear.

Due to its common use in gears, an involute test gear geometry was selected. A standard pressure angle of α = 20º was used with no profile shift applied to the geometry (x = 0 mm). A detailed specification of the test gear can be found in Table 1. Because of the thermal expansion of the polymer materials, the operating center distance was set to 20.05 mm.

The rotational speed of 1,176 rpm was selected based on the results from the authors’ previous tests. This can also represent an approximate rotational speed of the final gear application. The starting load level was 0.30 Nm and increased every 2·105 cycles by a value of 0.05 Nm. Several preliminary measurements were also conducted to confirm parameter adequacy. The starting load level of 0.30 Nm represents the low load level for the selected materials and gear geometry. Different material combinations were tested (PA6/PA6, POM/POM, and PA6-30/POM) at room temperature (23ºC) and without lubrication.

The torque and speed for the lifetime tests are shown in Table 2. The torque and speed are increased by a factor of 1.4 for a better comparison of the results. The speed was between 600 rpm and 2,305 rpm, while the torque load was varied between 0.30 Nm and 0.82 Nm. The tests were performed at 23ºC and without lubrication.

If the calculated COF values are compared with the recommendations in the VDI 2736 guideline, the biggest difference is with material combination POM/PA, while for the other two combinations, COF values are close together. With a reverse calculation of COF from the temperature calculations, a more realistic COF can quickly be determined and used for more precise gear temperatures, even for materials not listed in the VDI 2736 guideline.

Full lifetime testing was only performed for POM/PA6 material combination. The resulting cycles to failure are shown in Table 4. It can be seen that both speed and load decrease the number of cycles to failure. Gears tested at 0.59 Nm/2,305 rpm and 0.82 Nm/1,176 rpm resulted in immediate failure as a result of temperature overload. For the other testing conditions, gears failed as a result of root fatigue on driven gear PA6.

Comparison of Allowable Root Stresses and Operating Temperatures with VDI 2736

Table 5b shows a temperature calculation with factors specified in the VDI 2736. It can be seen that there are significant differences between measurements and calculations. A calculated standard deviation was 20ºC. Table 5c shows results with modified COF. The COF value of 0.36 for PA6/POM combination was taken from the literature [10]. When using a COF of 0.36, the calculated temperatures better match the measured data. The calculated standard deviation was still 16ºC.

In order to get a better correlation between measured and calculated temperatures, the VDI 2736 calculation factors were modified. Root heat transfer coefficient kθ,Fuß was modified from 2,100 to 1,505 and the coefficient c was reduced from 0.75 to 0.36. With those corrections, the authors were able to get a much better correlation between measurements and calculations. The calculated standard deviation in that case was only 4ºC. The biggest difference was at high load and high speed — probably as a result of hysteresis heating and high tooth deformations, which are not taken into consideration by the VDI 2736 calculation.

Table 6 shows tooth root stresses, which were calculated from the load and gear geometry based on the VDI 2736 guideline.

POM/PA6 polymer gears typically fail as a result of fatigue. However, if an improper material combination is selected (like PA6/PA6), polymer gears can also fail due to temperature overload. Fatigue can be measured using lifetime tests and is predictable. Temperature of the gears can also be calculated, but the results are questionable. In most cases, the melting failure occurred during the first hour of the gear test. If the gear pair survived the first phase and the gear body temperature is stabilized, fatigue will most often be the failure mode.

Wear was recognized as a damage mechanism only for some gear pairs, e.g., POM/POM. In this case, the wear rate was high even at acceptable load levels from the tooth root stress and temperature point-of-view.

For other combinations of materials, root fatigue was recognized as the main failure mechanism.

This paper presented an updated testing procedure for polymer gears, which enables a more accurate determination of gear temperatures, thus a better prediction of gear lifetime. When using a preliminary step test, a combination with good tribological properties can be determined. In addition, COF can also be calculated and later used for a more precise temperature calculation.

A full lifetime testing (together with temperature measurements) was performed for the POM/PA6 material combination. The results show a great effect of load and temperature on the lifetime of polymer gears.

In the authors’ research, polymer gears typically failed either as a result of root fatigue (POM/PA6) or as a result of temperature overload. Significant wear was only observed for the POM/POM material combination. 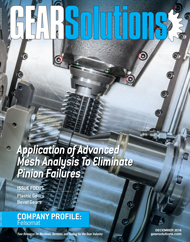 The Root Cause for Gear Noise Excitation

A driving force in workholding