Marposs has responded to a need for a shop-floor inspection system, allowing for real-time inspection of gears in various stages of production without the need for skilled setup.

Gear production is one of the most difficult tasks to be found in modern manufacturing. Producing complex, non-linear, three-dimensional geometries in hard, strong materials with an extremely high level of precision is a daunting challenge in its own right. Inspecting the results of the various manufacturing operations to assure consistent quality and performance is even more difficult. Quality assurance is extremely important for gears, because manufacturing imperfections tend to manifest themselves as noise and vibration, which are completely unacceptable in most applications. Of the many measurable features of gear teeth, the following six “double flank” are among the most useful for keeping the manufacturing process under control:

These features indicate a radial composite deviation and derive from different ways to filter the variation of the center distance of a pair of gears, typically a master gear and a production gear, tightly meshed together and put in rotation.

The absolute values of taper and lead and variations of both are also important measurements for process control. Although pure taper and pure lead errors are quite rare, and are due mostly to initial setting imperfections of the production machine that are corrected quite soon at the runoff phase, a mix of those two errors is quite often encountered when a part is improperly placed on the machine for any number of reasons. For example, if a blank is improperly placed on the chuck because of interference by dirt or chips, the resulting gear is cut in such a way that it shows a typical series of taper+ lead+ taper- lead- errors over 360 degrees. This can be thought of in terms of a combination of a lead and a taper error unphased by 90 degrees caused by the blank axis not being parallel to the machine axis. (Figure 1)

A conventional double flank check cannot detect that particular condition, nor can it discriminate between the two errors. It typically would return a runout-like signal that does not help the quality engineer’s analysis. This is why most conventional double flank checkers have gimbal stations. Until recently the standard method for checking gears in terms of double flank features, lead, and taper errors was to mount the part on an expanding arbor placed between a master gear mounted on gimbal mechanics and a rolling master gear mounted on a linear slide. As the part was rotated by a motor, any radial or angular imperfections were detected by sensors monitoring the movement of the rolling master linear slide and the gimbal mechanics.

In very simplified terms, this system inspects gear geometry by using the part’s bore, as established by the axis of the expanding arbor, as a fixed reference, and measuring the motion of the gimbal assembly and of the rolling master gear in relation to that axis as the part rotates. There are four inherent drawbacks to this method. The first is that expanding arbors require a great deal of operator skill to use, leading to a high incidence of inaccurate results. Typical lead tolerances for parts like automotive transmission gears are in the 18 to 25 micron range. Measuring these parts requires accurate axial location of the bore of the part being inspected, which is entirely dependent on how well the expanding arbor is operated. Also, the time involved in changing arbors is a major contributor to the low productivity of such systems. Secondly, the range of part size variations that can be measured by such a system is very small, requiring a different set of gimbal masters, rolling masters, and expanding arbors to accommodate different but very similar parts in a family, or even the same part at different stages of manufacture. In practice this means three different sets of gears and arbors are usually needed to measure the same part in the green, hardened, and finish honed states. Third, the mass of the rotating elements and the gimbal assembly generates enough inertia to limit the maximum rotational speed of the inspection to a very low RPM, making the process too slow for real-time shop floor inspections. Fourth, expanding arbors require scrupulous maintenance. Because of the tight clearance, they sometimes jam up and need to be carefully cleared, and their lifespan is often short.

Marposs engineers began looking at alternatives to this method of inspecting gears in response to customer requests for a system that was faster, easier to use, less expensive, and provided equal or better accuracy. The ultimate goal was a system that could be used on the shop floor for real-time inspection of gears in various stages of production without the need for skilled setup personnel or multiple masters and other components.

Since the gear’s ID is the primary datum used during the gear manufacturing process, there is a direct relationship between the axis of the bore and the manufactured orientation of the gear teeth.  The traditional gear checker measures lead and taper using a gimbal station with angular compliance. In the Marposs system, both the gimbal and expanding arbors have been eliminated by placing the part to be measured on an electronic plug—a plug gauge, in effect—that locates the center of the bore with three contacts at the top and three at the bottom. The gear is referenced by three carbide balls. This gauge still employs a rolling master gear, but all of the lead and taper measurements are made by transducers installed in the plug. (Figure 2)

The six transducers establish the electronic axis of the ID, and the measurements are performed with the rolling master and production gear meshed. As the production gear rotates, the ID plug reacts in the same manner as the traditional gimbal mechanics to detect gear lead and taper variation. This approach offers significant economic and operational advantages for shop-floor gear inspection:

It is worth reemphasizing the fact that this approach uses the gear teeth as reference and measures variations as displacement of the bore axis. In essence, it is a mirror image of the conventional system without the expensive gimbal and the hard to set up expanding arbors. The master can now easily be powered. In the resulting gauge, for which a patent has been applied, all of the drawbacks of the traditional design have been eliminated. It uses no expanding arbors, and elimination of the delicate gimbal master gear reduces inertia sufficiently to allow inspection at relatively high RPM. As a result, the gauge is both robust enough and productive enough to be used on the shop floor for real-time inspections either at the machine, or as part of a fully-automated production process.

Perhaps the most important advantage offered by the design is the ability to accommodate a sufficiently wide range of part sizes to permit testing of a part in all three stages of manufacture without changing any components. Because an electronic gage is now used to detect at any time the position of the axis of the gear to be measured, the system can accommodate variations in part dimensions of 400 microns or more with no degradation in measurement accuracy. In most cases this is enough to accommodate dimensional variations through the complete manufacturing cycle. That means it is now only necessary to stock a single master gear for each part that is to be inspected and a single plug per bore diameter range. Changeover from part to part is a matter of minutes and requires no special skills. An additional benefit of the new configuration is the ability to measure both diameter and taper of the bore, in essence providing a “free” test. By adding an additional transducer contacting the gear face, the system can also measure the perpendicularity between the teeth and the face of the bore.

In terms of accuracy, the new system is even better than the traditional approach. While gimbal-type systems provide results in the 4 to 5 micron range, the Marposs gear inspection system repeats to 2 microns. This meets the industry standard, which requires inspection systems to deliver accuracy that is 10-percent of the part tolerance or less. In addition, the system’s results have been compared with those made by laboratory-grade analytical machines that are able to explore each tooth on a part individually with extreme accuracy. The two data sets were virtually identical when the lab test checked all of the teeth. (Figure 3)

When using such analytical equipment, however, it is common practice to check only four or six teeth per gear in the laboratory, which many times results in an underestimate of the amount of lead and taper. Lab personnel are understandably reluctant to spend the time required to check every tooth on a gear because that would increase inspection costs and potentially slow production, but the Marposs system by its very nature checks all the teeth in one quick cycle. Since the Marposs roller checker provides comparable inspection accuracy, it is now practical to perform a complete inspection of all teeth on both flanks of a gear while maintaining production.

Nothing is perfect, or course, and this system is no exception. It is not suitable for “flat” thin gears, very large heavy gears, or those with a bore diameter of less than 13 mm. For the type of gears produced in the millions by the automotive, appliance, and power transmission industries, though, the new system offers a significant upgrade in the ability to monitor and control precision manufacturing processes in real-time on the shop floor. 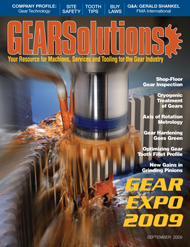 Grading the strength of steel