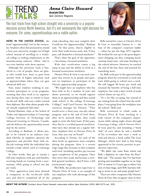 Here in the United States, the word “apprenticeship” isn’t in the vernacular. Students often feel pressured to attend a four-year university straight out of high school instead of enrolling in a technical college or seeking employment in the manufacturing industry. Often, they’re not even familiar with those options.

Although the university track is beneficial to a lot of people, there are plenty who would have more to gain from another form of higher education such as apprenticeships where they can gain advanced skill sets.

Sure, many students studying at universities participate in co-op programs, meaning that they work at an organization during their time in school to learn on-the-job skills and earn credits toward their diploma. But what about people who are already employed full-time?
Rachel Banham, chair at the School of Trades and Apprenticeships at Conestoga College Institute of Technology and Advanced Learning in Ontario, Canada, said she believes the apprenticeship system may be the answer.

According to Banham, it allows people to be trained to an industry standard whereby an employer sponsors the apprentice and provides them with on-the-job training while the individual also attends a trade school, such as Conestoga College.
In other words, they get to remain a full-time employee with pay and benefits, receiving hands-on training from a journeyman, while going to school one day per week.

“Once apprentices have been deemed as competent in the on-the-job skills area and they’ve completed all of the trade schooling, they may complete their Certificate for Apprenticeship,” Banham said. “At that point, they’re eligible to write their trade license exam and, if they pass, call themselves a licensed machinist.”

That’s what the goal of the apprentice  — becoming a licensed machinist.
With that certification comes a big jump in pay and the ability to work as a licensed journeyman machinist.

Ontario Drive & Gear is one such company that invests in its people and sponsors its employees to participate in the Ontario apprenticeship program.

“We might have an employee who has been with us for a number of years and shows potential, so we would register them in an apprenticeship and they attend trade school at the college [Conestoga College],” said Carol Gorenc, the human resources manager for Ontario. “They would serve a three-year, one-day release program, and at the end of level three, after we’ve assessed them, they could apply to write the final exam. If they pass, then they’re a certified general machinist. And since they already are a regular full-time employee here at Ontario Drive & Gear, they just stay on board.”
According to Gorenc, for each of the three levels an apprentice must complete during the program, there is a certain wage range that increases as they complete each level, including another pay increase upon completion of the program. Once they write their exam and become a certified general machinist, they’ll have a full journeyman’s wage.

Phil Belk, the production supervisor at Ontario Drive & Gear, is an example of one employee who took advantage of this program.
Belk started his career at Ontario Drive & Gear at Assembly Station A — the base of the company’s corporate ladder — where he put the Argo ATV together. He worked his way up to the press department changing out dies, stamping metal, running band saws, and pipe bending in the vehicle division. However, he reached the end of the line there and yearned for something more.

So, Belk took part in the apprenticeship program where he continued to work and train while going to school once a week. He still logged 40 hours per week and retained the benefits of being a full-time employee, but took a day’s worth of trade school classes on top of it.
“It’s a lot like co-oping, but instead of me coming from the school into the workplace, I was going from the workplace into the school,” Belk said.

Belk continued to climb ranks at Ontario Drive & Gear working in a wide variety of the company’s departments while taking night classes through Conestoga College, which Ontario Drive & Gear paid for, and attending a “book club” of sorts where he and a handful of his co-workers met once a week to read and discuss a book called The Lean Manager, which later lead to him being appointed to his current position as production supervisor.

“We didn’t just come from school and flash a diploma; we came from the floor,” Belk said. “The journey that I’ve had from putting axel assemblies together on an Argo ATV at station A 15 years ago to where I am now, it’s been huge, and ODG has been willing to invest in me and many people here.”
There are other companies like Ontario Drive & Gear who recognize value in their employees and encourage them to enroll in apprenticeship programs throughout North America.

One such company south of the Canadian border is The Gear Works. Mike Robison is the shop superintendent at The Gear Works Seattle, and in partnership with the Seattle Machinists Apprenticeship Program and Renton Technical College, he oversees the company’s four apprenticeship programs.
The machinist apprenticeships require 8,000 hours of training throughout a four-year period wherein employers such as The Gear Works cover all costs for schooling or supplemental instruction.

Apprentices are paid 68 percent of the journeyman wage to begin with and receive a four-percent raise every 900-1,000 hours until they reach the journeyman’s salary.

But even with all of the opportunities to earn more certification and higher wages, Robison still said that they struggle with getting people interested in apprenticeships from an early age, partly because they’re not aware of such options.

“We need to make students aware of other avenues that are available,” Robison said. “At the high school level, there really is no mention of apprenticeships or manufacturing. I think there should be some emphasis placed on alternatives to going directly into a four-year college and that there are a lot of opportunities available in manufacturing that can lead to very successful careers. It’s a great way to get the skilled journeyman-level workers that this industry requires.”

Banham agrees with Robison on this point, especially in regard to there being virtually no mention of apprenticeships to qualified students at the high school level by guidance counselors.

“There’s a continuous misconception that you don’t have to be academically smart to do an apprenticeship,” Banham said. “So, we actually end up with people being counseled to go into the trades who aren’t suitable for them, and the people who are suitable for them are being counseled not to go into them. These days manufacturing is becoming highly skilled. People could be working on five-axis machines and developing prototypes that are worth tens of thousands of dollars each. So, there’s a bit of a disconnect between the perceptions of the trades and the reality. And, I think that’s only further exacerbating the skill shortage. It’s a great career choice, but it’s not one that many people understand at this point.”

Apprenticeships are a viable alternative to attending a four-year college, and in an industry where your parts are only as high of quality as your people, it’s a practice more companies should consider adopting. 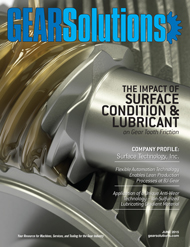