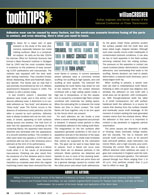 The basis for a major part of gear research is the study of the wear phenomena, especially between two metal rubbing surfaces. Wear is a complicated subject. As early as the late 1920s the German Office for Technical Sciences had formed a Wear Research Institute in Stuttgart that by 1945 had the most complete library in existence on the problems of wear, exceeding 5,000 publications and manuscripts. The institute was equipped with the best available testing machines. They included Amsler, Brinell, Nieberding, Mohr and Federhaff, Sawin, and Spindel. This facility was so vital that it was promptly reconstituted by the U.S. Military Government’s Research Council in 1945. The problem is still a priority today.

In last month’s column I described the abrasive wear mode, and in this article I will discuss adhesive wear. A distinction is to consider adhesive as “two body” and abrasive as “three body” wear. The former occurs in the absence of extraneous solid particles, and the latter is caused by such particles. Adhesive wear is always localized and can be mild, moderate, or severe, appearing on both surfaces sliding across one another. The mild form of wear has the appearance of polishing on the contacting flanks; the asperites have become distorted and laminated with the appearance of a smooth polished surface. The condition is often seen when low speeds (≤ 4,000 fpm) are combined with too thin a film thickness and a lubricant at the limit of its performance.

Usually ignored, polishing wear is a failure mode when it is the cause of dimensional inaccuracies. Polishing can also result from the presence of a fine abrasive and/or chemically active additives. Mild wear becomes classified as moderate wear when the original machining marks have been removed from the tooth flanks in contact. In current standards severe adhesive wear is commonly termed scuffing; hot scuffing at high speeds, and cold scuffing at slow speeds. The lubricant film separating the tooth flanks may shear for one of two reasons: either the contact stresses combined with a high sliding speed create a high rise in temperature, or the film separation is caused by a localized high flank contact combined with extremely low sliding speed. When the lubricating film is sheared, the metal flanks are then in direct contact. The tooth flanks will fuse together, only to be torn apart by the forces which are present.

For each adhesion we can locate a zone where a severe welding happened and promptly sheared. A sheared metal particle is often immediately adhered to the mating tooth flank. The irregularities on the two surfaces after separation generate scratches in the zone of separation and are in the direction of the separation. The localizations create load increases that cannot be supported by the lubrication film. The gear can be said to have failed due to seizure. Such a failure can occur even when there are no abrasive particles in the lubricant. Metal particles are detached and transfer to one or more of the meshing teeth. When the number of teeth are prime there will be a general damage caused by contact with the initial pinion and wheel tooth adherences. As the gears rotate these particles scratch the surface parallel with the tooth face and leave radial rough, irregular streaks. Although such wear usually occurs under inadequate or contaminated lubricant conditions, it can also be due to hard asperites in the flank surface removing material from the mating surface. The pressure on the asperites in contact can cause localized plastic deformations, localized adhesions, and overheating that leads to hot scuffing. Severe abrasion can lead to plastic deformation, a reduced tooth thickness, and a sharp-edged tooth tip.

When scuffing is present, a severe overload can lead to instantaneous tooth failure. Polishing is often not given due diligence and, similarly, the adhesion on one tooth with a small area can be ignored—with consequences. With through-hardened teeth the latter is of small consequence, but with surface-hardened teeth the adhesion is a source for cracks that develop from the surface inwards and eventually cause tooth breakage. At the moment of instant welding the heat generated creates cracks from the residual stress. When the adhesion is first seen it is important to conduct a dye penetrant or magnetic particle examination.

The prime causes are distortion of shafts or housing, heavy overloads, foreign bodies, and low viscosity. The risk is reduced with smooth tooth surfaces, run-in at 50 percent load, anti-scuff additive, clean lubrication, low micron filters, and a high viscosity pour point. Choosing the correct filter size is always a difficult selection when additives are used. A gear test conducted in England used the lubrication from a helicopter gearbox. The lubricant passed through four filters ranging from 1 to 40 μ/m. Only particles smaller than 3 μ/m had no effect on wear. 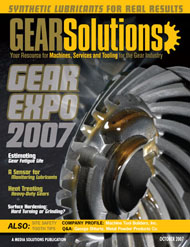 Part 1: Don’t compromise a quality gearbox by scrimping on seals and filters