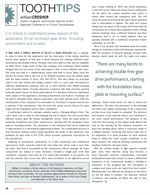 It was once a simple matter to select a gear reducer from a catalog. In order to allow for the application and the inaccuracy of the rating, selection factors were applied. At that time in North America the catalogs reflected basic dimensions and design criteria. The gear units were built to order and not available as shelf items. Today much of this has changed, and companies build modular designs that can use some of the same gears in two or three different size units. The units are built to a mathematical series and held in stock. Many used the Renard 10 series, that is the root of 10. Renard numbers cover the widest range with the least number of sizes. (ISO 497-1973). This also allows for prototype units to be fully tested and ratings verified. Even so, such units introduced to unknown applicational stresses such as in wind turbines and oilfield pumping units frequently failed. Housing distortion combined with high precision gearing being the prime reason for these past failures. It is therefore critical to understand every aspect of the application, including environment and location. Housings can be built to dissipate heat, improve lubrication, and lower decibel levels. With the development of the computer it is reasonable for the buyer to request and receive a printout of the calculations. This will show the actual service factors for each stage and the standards used in their compilation.

Fatiguing of mechanical components is a well researched and understood phenomena. Parts cyclically loaded fail even when the stress load is less than the static load that is acceptable by the components without damage. All major components are subject to cyclic stresses. Consider a single gear tooth that completes a dynamic load cycle as it is loaded and unloaded. In an epicylic unit with five planets, that occurs five times every revolution. In an eight-hour period such a gear rotating at 1800 rpm would experience 4,320,000 cycles. When the stress level is sufficiently low the parts can endure unlimited load cycles, a stress level termed the endurance limit. The S-N curve becomes horizontal at the place where unlimited load is anticipated to appear. The gear unit torque rating must be equal to the torque level that loads all components at or below their endurance limits. Rolling element bearings have a different behavior and their endurance limit is not so clearly defined. They are typically selected with a statistical 10-percent failure probability, an L10 life.

Most if not all gear unit standards base the torque ratings on endurance limits and minimum bearing life. With the exception of epicyclic gearing, all gear units develop radial loads at both the input and output bearings. These loads result not only in stress but deflections. The type and placement of the bearings can affect the relative positioning of the components as they move from loaded to unloaded. The direction and location of the external load is very important to the units overall performance. The distance of the load from the bearing on the output shaft affects the load on the bearing. As this distance increases, so does the bending affect, which if excessive leads to a fatigue fracture. Overhung and thrust loads are to be minimized. It is quite possible for such external loads to affect the tooth contact conditions. In an ideal situation the external bending counteracts the bending created fro the gear mesh.

With the modern design of high capacity compact gear units, their thermal rating has become a more important selection consideration. Excessive temperatures have been known to cause a differential expansion of the components leading to binding or expansion of the designed fits. The calculation is complex and many units are rated from test results. Manufacturers use different fan designs so the factor for the fan effect is variable. The lubricant, method of delivery, and quantity all affect the rate of heat dissipation. 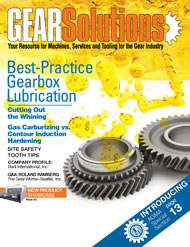