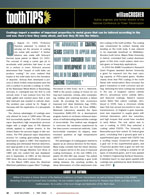 On August 12, 1902, Professor Thurston patented “a method for carrying out the process of coating one metal with another.” A further advance was made with Schoop’s thermal spray patent on March 13, 1915. The concept of using a carrier gas jet to accelerate solid particles had been in use for a century or more. Schoop’s process determined that “impact of solid balls can produce coating.” He soon realized that impact in the solid state led to the formation of deposits. Schoop then developed a process in which molten metal droplets were fed onto a surface to provide a coating. In 1935, at the Newmeyer Metal Works in Nuremberg, Germany, A. Liebergold was the first to cold extrude steel. It was realized from this first badly galled and cracked piece that a suitable lubricant was needed to extrude steel. The problem was solved by Dr. Singer of Germany with the application of a phosphate coating.

The obvious advantages of coatings were only utilized for tools in 1969 when TiN was first successfully applied. The CVD (chemical vapor deposition) high temperature process began with a single layer of TiN (titanium nitride) applied to carbide inserts. In the United States the process began in late seventies. The PVD (physical vapor disposition) process for coating gear-cutting tools was developed in Japan in 1980. This required no annealing and eliminated thermal distortion, and rapid growth in its use followed immediately. At the Chicago Machine Tool Show of 1980 only one coated hob was displayed, and in September of 1981, at the Hanover EMO show, they were multitudinous.

In the March 1983 issue the American Machinist published a paper titled “Coatings, Revolution in HSS Tools,” by R. L. Hatschek. TiAIN is the preset coating of choice for cutting hard materials. Initially, after resharpening, buildup and cratering became a failure mode. By recoating the hob, economics improved (ref: Gear Solutions, Aug. 2005). In March 1987, the U.S. Air Force AFWAL/Materials Laboratory awarded the Spire Corporation $480,000 for a development program based on ion-beam enhanced deposition of self-lubricating diamond-like coatings of boron-nitride. This method was designed to overcome the variations experienced by the then-current commercial methods. Cubic boron-nitride maintains its slippery, wear-resistant qualities at high temperatures (1800º F).

The advantages of coating gears started to appear as an obvious direction for the future. Many today consider that the future development of gears will be in the area of improved coating techniques. In the mid 1980s U.S. patent #4,184,380 was issued. The patent was based on accommodating a gear tooth sliding between the meshing profiles by shear deformation of a thin elastomeric (rubber) coating of the tooth profiles. The coating was compressed by contact, leaving only bending on the tooth body. It was claimed to be especially beneficial on Wildhaber/Novokov tooth forms. Wayne State University, in Detroit, concluded that coated aluminum gears of this form could replace steel involute gears on heavy-duty applications.

In 2003 the AGMA Foundation’s Research Grant Program awarded Aachen University a grant for research into the load carrying capacity of PVD-coated gears. Studies clearly show that PVD coating of the tooth flanks with metal-carbon films increase the gear’s resistance to both corrosion and pitting. Selecting the best coating has resulted in the use of tungsten carbon carbide (WC/C), amorphous boron carbide (B4C), and diamond coatings.

Balzer’s newest series Balini Star carbon coatings, introduced in 2006, have a chromium nitride layer that has proved successful in race car transmissions. In England a gear manufacturer was requested to supply gears with minimal lubrication, pitch line velocities, and high torques that would have resulted in early failure. The only option was to use a coating. In 2002 they selected a coating called ES200. The University of Newcastle-upon-Tyne tested 31 helical gear pairs, concluding that a ground gear and a superfinished gear coated with ES200 has a scuffing torque 42-percent greater than a gear set of two superfinished gears, and 70-percent greater than a gear set with two ground gears. The coating is suitable for all types of industrial gears, and it was applied by Timken’s Engineering Surfaces Business. A detailed report on spur gears applied with coatings was published by Gear Solutions in June 2007. 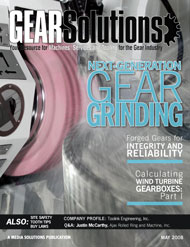