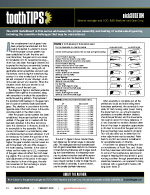 After a replacement set of gears have been properly manufactured and thoroughly inspected in a tester to insure that the proper contact pattern has been established in both the drive and coast directions, the gear set is now ready for installation into its respective housing–which has also been thoroughly cleaned and inspected for line bore concentricity, locating face perpendicularity, etc., along with all applicable carrier assemblies and end caps. If questions arise during the manufacturing process it is wise to refer back to the sample and compare it to your drawings, which will usually answer your question. When the situation arises that your answer is not definitive, consult the end user.

The diagram in Figure 1 illustrates potential problems that might be encountered, along with corrections to make in the assembly to rectify the existing problem. They represent the possible tooth bearings on the gear member of a pair of correctly made spiral bevel gears. The sketches in one column show the opposite side of the tooth shown in the corresponding sketch in the other column.

After the proper contact pattern has been established, the proper backlash must be verified. If the gear set is marked with the backlash obtained in the final test procedure, this dimension is what you should try to accomplish in the assembly. If the amount of backlash is unsatisfactory after a suitable bearing has been obtained, it will be necessary to correct the position of the gear member. In the case of 2:1 ratios and higher, the gear member may be moved axially for backlash with very little change in the tooth bearing. However, in the case of miters and low ratios up to 2:1, movement of the gear alone will affect the tooth bearing slightly. This can be compensated for by axial adjustment of the pinion in the opposite direction to that of the gear, the relative movement of the two being in proportion to the numbers of teeth.

The chart in Figure 2 shows standard backlash tolerances for certain ranges in diametral pitch. This table gives the recommended backlash for gears assembled ready to run. Because of manufacturing tolerances and changes resulting from heat treatment, it is frequently necessary to subtract more than one-half the recommended value from the theoretical tooth thickness of each member in order to obtain the correct backlash in assembly. In case of choice, use the smaller backlash tolerances.

After assembly is complete and all the preliminary visual and hand rolling tests have been performed, the assembly is now ready for test running under power. During the power test run, as a final inspection procedure a complete vibration analysis should be performed, and the documentation kept on record for future reference. It is very important to recheck vibration after the unit has been in operation approximately 30 days to insure that the gear set and the new bearings have seated in properly. This will also allow you to determine if a minor adjustment may be required. Refer back to my first and second installments for acceptable levels of vibration.

It has been my pleasure writing the last six installments of Tooth Tips, and I hope that they have been informative and helpful to some of the maintenance personnel in charge of keeping their equipment in good running condition through preventative and predictive measures–as opposed to being surprised with a catastrophic failure with long down times. 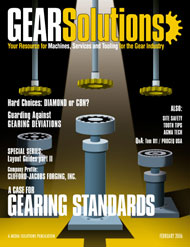