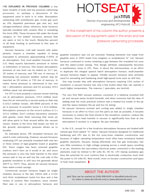 I’ve explained in previous columns a few basic tenants of endo and low pressure carburizing processes, so perhaps a discussion of the equipment used in each is in order. Atmosphere carburizing with endothermic gas, in-situ gas such as LPG (liquefied petroleum gas and air), and nitrogen-methanol utilize refractory lined furnaces typically insulated with ceramic fiber or insulating fire brick (IFB). These furnaces fall under the broad category of “hot walled” furnaces; devices that are warm or hot to the touch. Ninety-five percent of all heat treating is performed in this type of equipment.

As indicated above, IFB insulated furnaces are used in endo carburizing. However, vacuum furnaces employing LPC are primarily insulated with only two or three inches of rigid graphite board or graphite felt. Since oxygen has been removed graphite (carbon) won’t burn as it would in air, and since the pressure is very low, heat transfer to the steel vessel wall is low as well but the cold side of the graphite insulation is still very hot generally about 400°F to 700°F. Thus, almost all vacuum furnaces have water-cooled casings.

Commercial vacuum furnaces began as single chamber devices in the late 1950s with a 0.032 inch thick molybdenum metal hot face and a few inches of ceramic fiber insulation, since ceramic fiber was in use in atmosphere furnaces and graphite insulation was not yet invented. Heating elements now made from graphite were in 1950 made from tungsten or molybdenum ¼” rod. Vacuum furnaces continued to evolve retaining a gap between the insulated hot zone and the water-cooled casing. This design attribute subsequently becomes a maintenance issue in LPC. Then, in about the mid-seventies, in an effort to duplicate the integral quench batch atmosphere furnace, multi-chamber vacuum furnaces began to appear. Initially vacuum furnaces were primarily used for annealing and hardening small high-speed tools such as drill bits.

One may wonder why, with atmosphere furnaces requiring 13½ inches of insulation, a vacuum furnace has only a few inches when they can operate a much higher temperature. The reasons, I speculate, are twofold:

•The very first R&D vacuum systems consisted of a tabletop mounted bell jar and vacuum pump located beneath, and when someone had the idea of adding heat the most practical solution was a heated box inside of the jar and the space between the jar and box for wiring;
• As vacuum furnaces evolved and cooling was added to single chamber furnaces in an effort to force cool the parts as fast as possible, it became necessary to reduce the heat stored in the insulation; solution—reduce the thickness. Since heat transfer in vacuum is significantly less than at one atmosphere it worked, to a degree. No pun intended.

In the U.S., except for a few locations atmosphere furnaces are heated with natural gas fired radiant “U” tubes. Vacuum furnaces designed for traditional hardening and LPC due to the hot zone/inner chamber construction and because of higher operating temperature most often have resistance heated graphite elements. Vacuum, having effectively very few gas molecules, has very little resistance to high voltage jumping across a small space resulting in an arc, therefore the (secondary) electrical power connected to the heating elements must be limited to 80 volts AC, 60 Hz. LPC having acetylene gas thus the potential for soot (carbon) that is electrically conductive must limit the power to 24 volts AC. Next month, more on furnace construction and types of heat treat equipment. 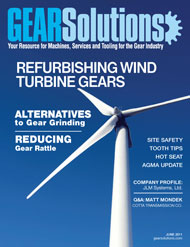