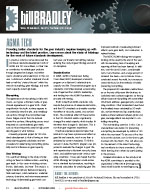 In previous columns we've discussed the continual standards-development work of AGMA and ISO committees, so their role as contributors to reliable gear products through progressive changes and refinements should be well understood. In this column I will discuss whether standards should lead or trail the "state of the art" within the area of micropitting, gear tribology, and tooth mesh capacity under high loads.

Micropitting
The appearance of micropitting is fairly well known, as it gives a frosted, matte, or gray-stained appearance to a gear tooth. Under magnification the tooth surface appears to be covered by very fine pits, and metallurgical sections through the micropitted wear shows fatigue cracks that are inclined toward the surface. Micropitting occurs most frequently on case-hardened gear teeth, such as those frequently used for high power density gears in wind turbines.

A recently proposed project for ISO standards development is that of having an internationally recognized calculation and test procedure for determining micropitting probability and its influence on gear capacity.

Gear Tribology
It is said that tribology is the study of interacting surfaces in relative motion–meshing gear teeth, in this case–including surface friction, lubrication, and wear. The study is a highly interdisciplinary field encompassing fluid mechanics, solid mechanics, materials science, chemistry, and micro-measurement technology. Understanding gear-mesh contact wear, particularly micropitting, requires entering the study of gear tribology and all of its disciplines.

Standardization
In 1998, AGMA's Helical Gear Rating Committee (HGRC) developed a research program on a lubricant's relationship to capacity and life. The proactive program by a standards committee received a resounding nod of approval from AGMA's leadership, and funding from the AGMA Foundation, to proceed with testing.

HGRC noted that AGMA standards only require the presence of adequate lubrication, and that ISO standards only weakly consider the effect of viscosity, speed, and surface finish. The combined effect of these factors in the ISO standard seldom significantly changed the rated capacity, which implies little effect from changes in lubricants. This is not what gear engineers experience.

Practical experience demonstrates that lubricants may have a pronounced effect on gear life and capacity, much more than is predicted by current standards. To fill this vacuum in data, the HGRC program was proposed to evaluate the changes in gear life and capacity due to lubricant viscosity, base stock, and additive type under various operating conditions. It was also hoped that the AGMA tribology test program would evolve into a standard test procedure, resulting in improved calculation for predicting gear life; improved methods of evaluating lubricant effects upon gear teeth; and a reduction in related failures.

The HGRC/AGMA tribology test program funding will be used by the end of this year, with the remaining task of analyzing and reporting all that has been learned. In addition, over the last 10 years, considerable work, many theories, and a large amount of research has been–and continues to be–conducted around the world, but consensus cannot be found on the methods of totally preventing micropitting.

The proposed ISO calculation method focuses on the ratio of lubricant film thickness to combined mesh surface roughness as the significant cause of micropitting with some effect of lubricant additives, gear geometry, and operating conditions. Other researchers have found that localized stress calculated by 3-D methods, surface texture and lay, asperity slope, relative surface hardness between pinion and gear, and edge effects are important in controlling micropitting.

The outstanding question is this: Can a standardized calculation for preventing micropitting be developed by AGMA or ISO within the next year? To be one of the first to know the answer, now is the time to get involved with the HGRC. This will allow you to stay abreast of the latest technology and contribute to future standards, all the while learning from others by participating in the process.

Detailed information on the activity of all the AGMA committees is provided on the organization's Web site at [www.agma.org]. Send e-mail inquiries to tech@agma.org. 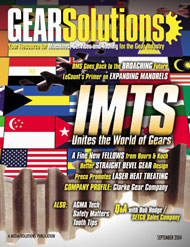