Third Wave Systems began as a discussion over a beer between brothers Kerry and Troy Marusich in 1993 and has since grown into a leading-edge company that has been creating problem-solving software for more than two decades.

Third Wave Systems produces manufacturing software that improves the machining process through physics-based modeling and had been adopted by cutting tool and part manufacturers worldwide. Now it has begun to expand its expertise into the field of gear manufacturing and is working to bring gear machining to the next level.

“We’re just beginning to move into the gear marketplace commercially,” said Cory Arthur, product manager with Third Wave Systems. “It is a more conservative market than we are used to. We realize it’s going to take some time, and it’s going to require discussions and evaluations for industry leaders to become comfortable working with simulations in an area where they probably haven’t before.”

What Third Wave offers the manufacturing sector is the ability to save time and money by virtually optimizing gear-cutting processes and other machining elements without interfering and without adding risk to production streams, according to Arthur.

“Our AdvantEdge finite element software provides a way for you to really understand and analyze what’s going on in the cutting process,” he said. “Because it is virtual, you can slice the result and look at what happens beneath the surface of the cutting tool and the workpiece. You can examine how the chips are flowing in areas that may be impossible to see experimentally even with a high speed camera. In an experiment, you may collect the chip that comes off the workpiece, which gives you an indication of how it was formed, but it doesn’t actually show you how it was formed as it’s forming. That’s part of what our software brings to the table.”

It basically boils down to allowing a manufacturer to test out a process before it’s manufactured, according to Arthur. And that also applies to processes that might result in defective parts once they begin production.

It can take years for a gear to be manufactured at an optimal level where a company is getting the tool life it wants and achieving the material removal rate it’s looking for. A reason for that extended optimization time is that it’s difficult to experiment or even change once on the line, Arthur said.

“These machines are expensive, and you really want them to be producing, especially with the industry margins where they are. It’s very important to maximize your machining power and the machinery you have,” he said. “Our software can enable customers to reduce that time significantly and make sure they’re not taking a machine off the line for trial-and-error testing. Changes that are tested through our software are much more likely to work the first time in reality.”

For Third Wave Systems, machining is the crux of what it does.

“We don’t really do anything else,” Arthur said. “What we do here is machining. We don’t do metal forming; we don’t do surface measurement. We really focus on the machining aspect for our customers for gear manufacturing. I think that sets us apart.”

Even though it appears that Third Wave’s entry into gear manufacturing is new, the research that preceded that entry is not.

“We’re just releasing software for the gear industry, but the work that we’ve done for gear machining was started years ago,” he said. “We’ve spent a lot of time getting into gear machining including running some validation on our machines to be able to know that what we’re producing and what we’re putting out into the marketplace has real value.”

Much of the machining equipment that Third Wave Systems has amassed in-house over its existence has generated a wealth of data that has added to the quality of the software it produces.

“Previously, we were doing a lot of our validation of our results outside the company, but machining in-house has allowed us to do a lot of that validation internally; we actually know that what we’re predicting is accurate and is useful, because otherwise it’s just pretty pictures,” Arthur said. “In manufacturing, what we’ve found is that even with our validation work, no one believes what you tell them. Engineers have a healthy skepticism of anything new. We validate here because we want to see that it’s working with our own eyes. We take that data; we show it to customers, and that gets the conversation started. After a successful evaluation of the software, they will do the same thing at their facility.”

“More recently, we’ve added gear-machining capabilities to the finite element analysis product, AdvantEdge, as we expand our market presence in machining and manufacturing,” Arthur said. “And of course, the work that we’ve done and are continuing to do with cylindrical hobbing and with spiral bevel gear manufacturing is more complicated than anything else that we have done with the software today in terms of kinematics and really being able to accurately represent how that tool is cutting through the workpiece in the middle of cutting.”

But Third Wave doesn’t stop at supplying the software. It also will assist companies using the software through its wealth of manufacturing knowledge and skill in applying simulations to real-world problems.

“Maybe a customer doesn’t have the person to use the software today, or maybe they just don’t have the time because of a time crunch; we offer services where we can help out to optimize tool life, to help with chip control, and to investigate different cutting techniques,” Arthur said. “We utilize our full software and machining capabilities to solve our customer’s problems.

Arthur emphasized that Third Wave’s staff isn’t just a bunch of tech geeks. It has extensive machining experience and a track record of success in making change.

“Our applications engineering team is full of machining guys,” he said. “We have a lot of guys who do finite element analysis, but they also have real machining experience. Working with us, we can help you to solve your problem and understand what’s going on through a combination of experiment and simulation.”

What adds to that experience is Third Wave’s commitment to being commercially focused.

“There are a lot of other softwares out there that really cater to an academic clientele,” Arthur said. “We value that and have a large academic user-base, but our focus is on commercial customers and commercial needs. We don’t expect users to set a hundred different parameters on which they have to be an expert. We work very hard to select the right friction model, to select the right finite element type, to make high-quality material models specific to metal machining. The user can be an expert in machining, and we deliver the modeling expertise in the software, so the users can get the answers they need with as little of their time spent in setup and results investigation as we can manage.”

When Third Wave Systems began in 1993, it introduced a 2D finite element software used by some large aerospace manufacturers as well as some large U.S. cutting tool manufacturers to study chip formation and in order to understand how heat was flowing into the workpiece, according to Arthur.

“In the early ’90s you really couldn’t easily capture the heat coming off with the chip,” he said. “You still can’t easily study heat flow within the tool and the workpiece.”

In 2001, Third Wave added 3D capability to AdvantEdge and, in 2003, released the first version of Production Module for toolpath optimization.

“A lot of AdvantEdge 2D customers started looking at modeling 3D cutting geometry, first in insert manufacturing and later with solid tooling. Our business has continued spreading throughout the general cutting industry since that time,” Arthur said. “In 2001, we also expanded to an additional product and took over from General Motors a 2D software for force prediction and optimization of face milling, drilling, and turning operations. This was released a few years later as Production Module. With virtual force estimation, you could basically understand what you were going to cut before you cut it. We took that software, and we expanded it into 3D milling, added automated optimization for both 2D and 3D, reducing the amount of time that you’re spending in-cut, not based on volume but based on forces. So you’re actually looking at the forces occurring on a virtual representation of the cutting tool.”

As Third Wave makes more of a name for itself within the gear industry, Arthur said it will continue to work on ways to improve its performance and expand its range within the gear marketplace.

“We want to make sure we continue this momentum and expand our solutions to the full range of machining problems in the gear industry,” he said. 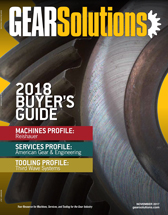