With advanced engineering at the core of its forging and gear divisions, Sona BLW
is constantly tackling demands while developing and implementing solutions for its customers.

And for a company whose offerings include the sale of 60 million gears and more across the globe, that statement might be the perfect way to describe the force behind the company’s worldwide success.

“Today, we make 147 types of gears,” Kapur said. “We build our own dies and tooling fixtures. And we’re very technology oriented.”

“We have the capability to design gears,” Kapur said. “And this is something that we’ve developed over the years.”

Sona has eight manufacturing plants: four in India, three in Germany and one in Hungary. The company employs more than 2,700 people worldwide, and it has 100 engineers in R&D who have created 12 active patents.

This extensive product range is supplemented by Hatebur-forgings, cold-extruded parts, steering knuckles, and sophisticated precision-forged parts for the truck industry.

The company’s precision forged components provide the optimum combination of the functional requirements that modern high-performance drivelines place on component design and safety, while maximizing quality and minimizing cost, according to Kapur.

“Our main goals consist of more than just the serial production of transmission components,” he said. “Component design and optimization with regard to function and costs are also essential for fulfilling our customers’ needs.”

“Our mainstay product was warm forged bevel gears and we control 12 percent of the global market,” he said. “We supply to car manufacturers – from passenger cars, to commercial vehicles as well as off highway vehicles.”

With Sona’s technology, the company offers a combination of hot- and cold-forging processes that permit the manufacturing of high-strength components with complex functional elements that are ready-for-assembly. Sona develops these components while working closely with its customers, according to Kapur.

“We get involved right from the beginning. The customer gives us a requirement in terms of what kind of quote they need and what they want the gear to be, and we’re able to design it right from scratch.”

Sona develops a partnership in terms of investment and development, and integrates the functional elements into the forging design, according to Kapur.

“We continuously work closely with our customers,” he said. “Whether it be light weighting or whether it be changing gear ratios, we continue to invest our energy in testing in those kinds of facilities so that we are ahead of the pack, while providing our customers solutions that they need.”

Advanced design and engineering proficiency have always been at the core of Sona BLW’s forging division, according to Kapur. The company’s engineering team is constantly tackling demands while developing and implementing solutions for its customers. And it does this while searching for new techniques implemented in the design and manufacture of complex, high-strength forgings.

As the company has diversified, Sona has been able to branch out in many directions beyond gears, according to Kapur.

With all the multi-faceted design, manufacturing, and development going on at Sona, it might be hard to believe that the whole enterprise is still very much a family business.

Before Kapur’s father, Dr. Surinder Kapur, passed away in 2015, the two of them ran the entire business together, but Sona’s journey actually began about 30 years ago.

“We started with a joint venture in the steering business,” Kapur said. “When Suzuki came to India, it created an opportunity to set up component businesses, which made way for the creation of joint ventures from a technology perspective. My father set up the business in 1987 and we started production in 1989.”

Dr. Surinder Kapur started this first joint venture with a steering company from Japan. It began life as Koyo Steering and is now called JTEKT.

“That’s how we started our automotive journey,” he said. “In the ’90s, we were part of several other joint ventures, one of them being Sona, what today is Sona BLW. BLW invented warm-forging technology for bevel gears in Germany and licensed a few companies. One of the companies they licensed in the 1960s was Mitsubishi, and we partnered with them in this technology.”

In the early 2000s, Dr. Surinder Kapur decided he wanted to be the largest producer (by volume) of automotive bevel gears in India. In 2008, the Sona Group acquired the forging division of ThyssenKrupp (who had earlier acquired BLW) and became the largest manufacturer of forged gears by acquisition. In 2017, the Sona Group acquired the 25 percent share of Mitsubishi Materials.

The future of Sona

The production of electric vehicles is where Kapur sees the future of gearing and Sona.

“There will be a big push toward electrification, and we’re ready for that,” he said. “Just the fact that we already have a healthy supply to electric vehicles makes us future ready. And we’re going to continue to see newer products. Our acquisitions in the future will also be technology oriented, whether it be in the connected space or in the electric space.”

Kapur is proud that Sona products exist in electric vehicles, and he expects that trend to continue. 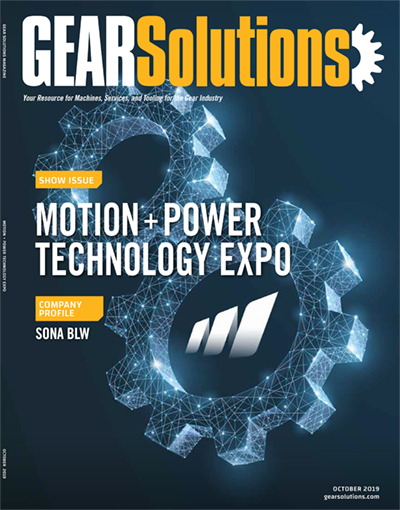