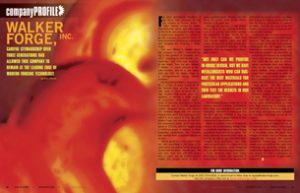 For three generations members of his family have overseen the legacy created by Gordon Walker in 1950. Having worked for Walker Manufacturing—which was also owned by his family and produced a wide range of automotive supplies—he wanted to go into business for himself, which he accomplished by purchasing a spring and axle company and renaming it Walker Forge.

“His son, Willard T. Walker, joined the company in 1957, eventually rising to the position of president and CEO,” according to John Nowak, vice chairman,” and he’s now chairman of the board. Then his son, Willard T. Walker, Jr., came onboard in the early nineties, and he is now president and CEO. So Walker Forge is a third-generation family owned company.”

Headquartered in Racine, Wisconsin, for a number of years—where all of the Walkers grew up—the decision was made in 1974 to scout for a new location that would allow the company to service a wider range of customers more easily. Eighty acres of land was purchased in nearby Clintonville, and a 12,000 square-foot custom designed facility was erected. The company began with two hammer forging lines, which was expanded to five within a short period of time. By 1982 Walker Forge had installed its first 850-ton mechanical press, which has since grown to 10 lines, with the largest being a 4,000-ton press. In addition to these expanded capabilities, the company has swelled from a physical standpoint as well.

“We’ve grown in a very uniform manner, with something in the range of 24 additions to the original facility being conducted over the years,” Nowak says. “We now have more than 250,000 square feet of space, and we employ approximately 300 people—which is quite a jump, considering the company only had about 16 workers when Gordon Walker founded it 56 years ago.”

Although the company is well diversified in terms of the markets it serves, one of its primary specialties involves the production of gear blanks for a wide variety of industries. “And while that includes engines, axles, and light trucks, for instance, we also provide gear blanks for recreational vehicles,” Nowak explains. “Even the Segway has a Walker gear in there.”

The company keeps a close eye on its revenue sources, however, according to Mike Gray, vice president of sales and marketing. “We want to make sure that we don’t get too invested in any one market, and we’re always looking for new markets and opportunities.”

While its customer base is located primarily in the United States, Walker Forge is constantly reaching out to other forging operations found around the world. “We enjoy planning reciprocal plant visits so that we can stay on top of the latest technologies being developed,” says Gray, “and we contribute to the relationship by sharing the advances we’ve integrated into our own manufacturing processes.”

These advances have been many, according to Nowak, and especially in recent years. “I believe that we were one of the first companies to move into induction heating for forging, and to utilize 2D and 3D forging simulations. In addition we were—and still are—one of the few forging companies that conducts its own internal heat treating.”

A particular point of pride involves the company’s engineering and metallurgical services. “Not only can we provide in-house design, but we also have graduate metallurgists who can suggest the best materials for particular applications, and then test the results in our laboratory. By controlling the process so comprehensively—from design all the way through heat treat—we are able to achieve tighter tolerances than ever before, while at the same time minimizing stock removal. Many companies no longer have metallurgists on staff, so we think that’s a crucial support service in meeting our customer’s requirements and satisfying their needs.”

Gray agrees. “We offer one-stop shopping, if you will, all the way from the initial design through material selection, forging, and heat treating,” he says. “And our engineers will travel to meet with our customers during the initial sampling phase to make sure that everything is running well. And that’s whether they’re a large or a small shop, because we pride ourselves on covering a very wide portion of the market.”

Over the years, Walker Forge has seen the transformation of forging from an art to a science—and, indeed, it has played a major role in that evolution. “Our goal is to constantly utilize the latest technologies to ensure that our forgings are designed and developed with near-net tolerances,” Nowak says, “providing the lowest total cost while at the same time preserving the product’s integrity and functionality. Abiding by those guidelines has helped us build a reputation as a premier forging source for gear manufacturers.”

For More Information:
Contact Walker Forge at (262) 554-2929, or send e-mail to Mike Gray at mgray@walkerforge.com. Visit the company’s Web site at . [www.walkerforge.com]. 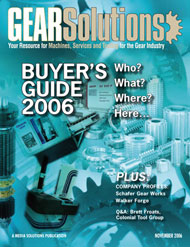