Over the past 32 years this company has established a solid reputation, which is now enhanced by its new U.S. branch office—TSA America, LLC.

Although he was born in Spain, Jose Maria Cunill founded and built his company in Argentina, where he’d moved when he was seven years old. “My father started out making gears for Leyland buses,” according to his son, Mariano Cunill, “but he soon found out that it was very complicated and expensive to get gear cutters to make the parts he needed. So that’s when he started studying the mathematics of gears, and how they’re made, so that he could manufacture gear cutters himself.”

His hard work led to the founding of Transmecanica, S.A., in 1973, which began making gear shaper cutters, and then shaving cutters, rolling dies, deburring and chamfering tools, POT interior broaches, master gears, and spline plug gauges: “Basically launching a new product line every couple of years,” Cunill says. And even though his father — who is president of the company, and still a guiding force in its R&D efforts — is not a school-trained engineer, his field experience and entrepreneurial drive carried him and his company forward to the point that it now employs seven full-time design engineers, and a total of nearly 50 employees at its manufacturing headquarters in San Fernando, just outside of Buenos Aires.

The results of their effort spans the globe, with one daughter company located in Spain and another that was established last spring in Indianapolis under the name of TSA America LLC. “We’ve been doing business in the United States for the past four years through a representative, but we decided that the best way to serve our existing customers there, and to earn the trust of new clients, was to create a local company in the U.S. from which we could enhance deliveries and offer on-site technical assistance,” says Cunill, who holds an international and bilingual MBA from the Universidad Torcuato Di Tella, in Buenos Aires, and is managing director of the new U.S. company. “We have a full-time sales manager and secretary currently on site, and we plan to increase our staff as business grows.”

Even though this new location represents a significant investment by the company, it’s by no means the largest that Transmecanica has in the works. According to Cunill, the company plans to double its production capacity in the coming year. This will lead to shorter delivery times for its international customer base, one of TSA’s key differentials. Even now, Transmecanica’s technology and equipment is quite impressive, including in-house heat treating using a high-tech vacuum furnace, a PVD coating center, a metallographic laboratory, and an outstanding quality control department. In addition, the company is a pioneer in the utilization of PM high-speed steels from the world’s most prestigious steel producers.

As for where these tools go, Cunill says that, currently, about 30 percent are shipped to Europe, 20 percent to the United States, 5 percent to Asia, 38 percent stay in South America, and the rest are sold to other companies in countries found around the world. The main emphasis, however, is on building its presence in the U.S. market. “All of our engineers speak English fluently, and one of the reasons we set up our Indianapolis sales center is to encourage communication between our customers and our design engineers. We’re committed to giving our customers exactly what they want, right when they need it, and we believe that establishing TSA America will help us to achieve that goal.”

Cunill says that he’s proud of what his father has accomplished, and to have the opportunity to carry on in his footsteps. “No matter how large this company becomes, it’s still a family business, with many of my relatives sitting on the board of directors,” he says. “In fact, my brother Marcelo, an industrial engineer, is our engineering director. We have a personal interest in everything we do. We take the quality of the tools we produce and the services we provide very seriously.” 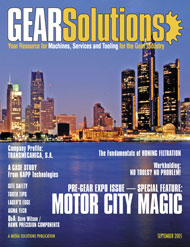