This company is constantly seeking manufacturers of equipment that will save gear manufacturers time and money while providing the quality and accuracy they require.

Share on Facebook
Tweet on Twitter
PDF
As a longtime distributor of Okuma machine tools, KGK International — which is based in Buffalo Grove, Illinois — was already well acquainted with the gear manufacturing industry and interested in broadening its related offerings. With many Japan-based manufacturers seeking representation in the United States, KGK had quite a few to choose from, but it finally decided to focus on two areas that would complement its existing Okuma line with Fanuc controls: gear measurement and hobbing. With that decision made, the next involved how to introduce the two lines to potential customers in North America.
“We decided to take advantage of the fact that IMTS 2008 coincided with our decision, so that’s when and where we introduced the TTi line of gear measurement equipment and a hobbing machine and hob resharpener manufactured by the Hamai Company,” according to Tom Donnowitz, sales manager for KGK International.
“These are both midsize companies with long histories, but they needed help marketing their products in the United States, so that’s where we came in. We saw the quality of both company’s products — even contacting current TTi users in the U.S., of which there are about a dozen, to make sure they were satisfied — and that they were priced competitively, so we felt that the gear manufacturing industry would benefit from knowing about them.”
Tokyo Technical Instruments, or TTi, is a family-owned business that was founded in 1972 to provide cost-effective, high-precision gear verification to companies around the world. “They offer everything from the SCL-250S, which is the world’s first mobile and ultra-compact tooth profile and tooth-lead gear checker, to the 1500E stationery model,” Donnowitz says. “This line allows us to offer a full range of equipment that is capable of measuring gears from 1mm/.04” to 1550mm/61” diameter. TTi also manufactures the majority of the parts used in its machines in-house to reduce delivery time and to improve quality control.”
Donnowitz explains that the TTi machines feature a symmetric frame design and a large spindle for stable operation. The X and Y guideways are similar to a milling machine, utilizing dovetailed turcite-coated slides with a mirror finish developed by the company to provide high wear resistance. The E-series machines also use Heidenhain glass scale and ensure an accuracy of  0.1 micron.
“Major auto manufacturers in Japan use TTi machines for their ease of use and accurate reporting,” he says. “The company also reports that there is a trend toward using their double-flank gear rolling testers in the automated manufacturing line to ensure accurate gear production and to reduce product loss.”
A new project focuses on the calibration of gear measuring machines. Like others, TTi uses a master gear for final machine calibration before it’s shipped to a customer. This type of calibration is accurate as a comparative measure, but there is some question as to its precision as an absolute calibration in the 3D position. TTi is working with university researchers on developing new formulas to provide a more-precise process for 3D calibration. The company has designed two ball-wedge artifacts that can theoretically measure both lead and profile for absolute 3D position. One is currently at the TTi facility, and the other is being tested by the Japan Gear Manufacturers Association. “Existing means of calibrating 3D position often require multiple tools and time,” he says, “but if this method is proven it would allow for more-accurate and less-expensive 3D calibration.”
KGK has also agreed to represent the Hamai Company, which was established in 1938 to produce high-precision gear hobbing and automatic hob sharpening machines. Hamai previously supplied mechanical hobbing machines to the U.S. market, but now is offering a new line of CNC machines. In addition to the N60 (see sidebar for specs), “We offer the N40, with a 40mm/1.57” cutting diameter, and the N80H (80mm/3.14” cutting diameter) hobbing machines, as well as the GN150 hob sharpening machine, with an 80mm/3.14” sharpening diameter,” Donnowitz says. “These precision machines are capable of high-speed dry cutting, including crowning and taper gear cutting.”
A subsidiary of Kanematsu KGK Corporation — one of the world’s largest international industrial machinery trading companies — KGK International has been in business for more than 25 years and has two locations in the United States: its Illinois headquarters and an additional showroom in Suwanee, Georgia. With application engineers on staff to assist customers in developing turnkey packages, Donnowitz says its priorities are quite clear. “Our goal is to provide our customers with manufacturing solutions that fit their needs perfectly, and to back up each sale with the excellent customer service that we’re known for, and to which all of our efforts are dedicated.”
MORE INFO  Call 847-465-0160, send e-mail to sales@kgki.com, or visit online at www.kgki.com. 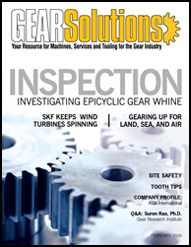