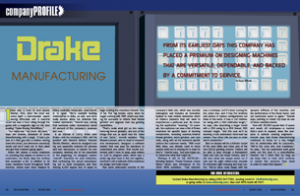 There was a time in and around Warren, Ohio, when the most welcome sight a manufacturer experiencing difficulties with a machine could see was a truck rolling through the gates with a magnetic sign on the door reading “Drake Roving Retrofitters.”

“Our motto was ‘You Crash, We Dash,’” says Jim Vosmik, president of Drake Manufacturing, with a laugh. “It had a picture of a little guy with a toolbox running down the street, and whenever somebody would call we’d head out to their plant and get their machine going again.”

Drake still places a heavy emphasis on providing that degree of service to its customers, but these days the territory has expanded a bit. In addition to its many machines found throughout North America, others have been shipped to China, Australia, Korea and, most recently, to Egypt. “We’re currently building relationships in India, as well, and we’re really excited about the potential that market represents,” Vosmik says, adding that overseas sales represented about 45 percent of the company’s revenues last year.

It all started in 1972, when John Drake—still the company’s CEO—left his position with General Motors’ Packard Electric Division, where he designed tooling and assembly systems for presses and wire harnesses, to launch his own company. Working out of his basement in the beginning, he designed custom “one-off” machines for area industries, first contracting the actual manufacturing out to local companies and then leasing 4,000 square feet of space to begin making the machines himself. One
of his first big breaks came when he began working with TRW, which was looking for someone to rethink their thread grinders and upgrade their tap grinding capabilities.

“That’s really what got us into manufacturing thread grinders, and one of the things that set us apart was the ‘ease of use’ factor,” Vosmik explains. “Stig Mowatt-Larssen, who is head of research and development, designed a software system that was easy for operators to understand and utilize. That meant customers didn’t have to keep code writers on staff to program parts, which was a pretty big deal back in the mid eighties, and that’s still a hallmark of the machines we design and build today.”

That same philosophy extends to the company’s Web site, which was recently redesigned and includes an innovative feature to help visitors determine which of Drake’s products they will need to manufacture a particular part. By choosing the application “steering,” for example, the customer can view a list of Drake machines for specific types of steering components, including external/internal thread grinders, worm grinders, and rack mills, along with all the technical specifications the customer needs. “With most Web sites, you already need to know exactly what you’re looking for in order to find it,” Vosmik says, “but ours helps you to determine what that might be.”

Perhaps it will be the GS:TE-LM—Grinding System, Thread External, Linear Motor—which was introduced at the 2004 IMTS exhibition. “That machine was a prototype, but it’s been running for two years now, and it has five brothers and sisters of various configurations out there in the world. It has a 150 millimeter swing with a 300 millimeter length,” he says, also describing a larger model with a 350 swing by a 650 thread, 800 mm-part length, “and this year we’ll be showing a fully automated robot-load tap version. Four other LMs are also on order and in production.”

Also on display will be a full-size model of the work table and index axis of the new GS:G2 grinding system. Visitors will be able to peer through a transparent table and see the linear motors, and it will also show the torque motor on C axis and its eight million-code encoder for extremely tight indexing and lead control. “We’ve been really happy with the dynamic stiffness of this machine, and the performance of the linear motor, and our customers seem to agree,” Vosmik says, pointing to Forest City Gear as one of those satisfied clients.

Now with 35,000 square feet of space and nearly 40 employees—a number that’s soon to expand, since the company is actively seeking engineers—Vosmik says that Drake Manufacturing continues to focus on a key insight into its relationship with its customers. “We’re the ones who love machines,” he says, “but our customers want good parts out the door in a cost-effective manner. So I think that as long as we keep that in mind we’ll continue to deliver the products they need in order to make that happen.” 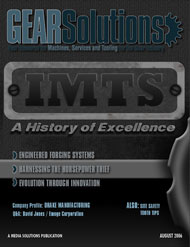