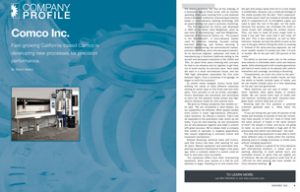 The history of Comco, Inc. has all the makings of a Hollywood rags-to-riches script, with an inventor spending three years working from a one bedroom home in Burbank, California, to becoming an industry leader in micro-abrasive blasting technology with an award-winning tool used in precision machining.

“The first equipment for Comco was developed in 1965 by my father, Herb Weightman, when he was head of manufacturing,” said Neil Weightman, chairman of the board for Comco, Inc. “The product is the MicroBlaster®, a micro-abrasive blaster used for selective cleaning, focused cutting, precision deburring, and surface texturing in medical manufacturing, the semiconductor market, precision machining, and in the aerospace industry. As an electrical engineer, salesman, and head of manufacturing in Southern California selling to the aircraft and aerospace industries in the 1950s and ‘60s, he spent three years tinkering with concepts for how to mix abrasive and air together to get them out of small nozzles for precision work. Herb really did start in a small one-bedroom house, and two TWA flight attendants assembled the first units between flights. From a workshop in his garage, he began to build this business.”

As market needs changed, Comco found itself fulfilling the needs of many different industries looking for better ways to fine finish and etch their parts. From aircrafts to ink jet printer cartridges, Comco developed new processes and techniques to marry the fine abrasive media stream and high-velocity abrasive media for more precise work.

“We grew by finding companies that needed us,” he said. “We are considered a sand blaster, but our capabilities are different. When people needed more control in small, high-tolerance, difficult-to-reach locations, we offered a solution. That’s how we expanded to the automation side, where we are today. If you are shot peening, we can consistently mix air and abrasives together and make it uniform with great accuracy. We’ve always been a company that looked at specialty or targeted applications that require engineering or precision motion and movement mechanisms.”

Ruthann Browning, technical sales with Comco, said that Comco has been shot peening for over 20 years. Manual equipment and automated shot-peening equipment development began a few years ago, when a customer asked if a system could be built to shot peen more accurately.

“Our equipment differs from other shot-peening equipment, which uses nozzles of a half an inch diameter or larger. Standing six to nine inches from the part and using a spray shot out in a cone shape is problematic, because only a small percentage of the media actually hits the part. That’s expensive. The media wears itself out instead of actually doing what it’s supposed to do. To strengthen a gear, you need to peen the root of the gear, not the tooth, because this process can misshape the tooth or cause issues with changing the surface texture. Then, you have to mask off every single tooth or build a tool part that could hold it and mask off the part. This is also expensive, as well as labor intensive. Instead, we have the ability to peen at the root of the gear without hitting the tooth or masking it. Instead of the spray-and-pray approach, we use much smaller nozzles of usually less than 1/4-inch or smaller. We hit the part with 100 percent of the media.”

The ability to precision peen only on the surface area reduces or eliminates labor costs and reduces waste, while allowing parts with complex geometries and hard-to-reach areas to be peened with uniform intensities and coverage, according to Browning.

“Comparatively, we come very close to the part,” she said. “We use a much smaller nozzle, we have the ability to handle multiple types of media, and we can handle multiple parts at a time depending on the part size and geometries.

Browning said the first question a potential customer generally asks is, ‘What about the speed?’

This shot peening equipment is also able to store three different sizes of media within the machine, allowing users to change processes or media sizes without changing equipment.

“The gear market is a great fit for micro-abrasive and shot-peening products in areas such as peening, deburring, or small splinter burrs and controlled erosion on gears that are slightly out of tolerance. We are also good at small hole ID at .125-inch for shot peening and much smaller for micro abrasive blasting.” 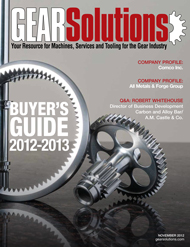