From humble beginnings, this Houston company is poised for growth.

According to Jack Nowlin, his father was known for his strong work ethic. It’s what led C.B. Nowlin to found his own company, in fact. “He’d get to work in the morning, and everybody would have to take a break,” he says. “And then they’d have lunch, and then they’d have to take another break, and he just got tired of it and said ‘I’m going to do something different.'”

What he did, though, is a stock story in the annals of entrepreneurial enterprise: he started his own company in his garage. “He started out with a lathe, a mill, a welding machine, and a drill press, and he’d bore sprockets and gears and make bushings for local distributors. So we had to park out in the driveway when I was growing up,” Nowlin says with a laugh.

Although his father started out small, working in the evenings with a single assistant, he knew that he had cheap labor nearby — and with the same last name. “My brother and I were responsible for sweeping shavings and cleaning the place up every night after supper, so I’ve been around this business most of my life,” he says.

Nowlin found the work interesting, and he soon advanced from pushing a broom to operating a lathe and learning to run the gear machines. Then, after earning a degree in business management from the University of Houston, he decided it was time to join the family business. “I worked for another company for about six months after I’d graduated, but then I decided it was silly to work for somebody else when I could come over here and learn the business from my dad,” he says. “So I started doing inside sales in 1972.”

The company had outgrown the garage by that time, and his father had purchased the adjoining lot, torn down the house that was standing there, and built a proper home for C-B Gear & Machine, Inc.

Over the years, Jack Nowlin learned the trade as the company grew, finally purchasing land and building a new 75,000 square-foot facility across town in 1984. A year later, in 1985, he became president of the company when his father died. He’s not alone in carrying on the family tradition, however, since his own son, Jared, now works in the company’s purchasing department. “He studied industrial distribution, which is a blend of engineering and business, at Texas A&M,” Nowlin says. “And his younger brother, Jed, is enrolled in the same program.”

With three generations having now been involved in the company’s progress, the Nowlin name has been a constant for more than 50 years. While that hasn’t changed, much else has: “When I think back to the early days, when I was out in the shop machining parts after school and on the weekends, it’s kind of amazing to think of how far we’ve come in terms of technology,” Nowlin says. “The work I did back then was pretty crude compared to the way it’s done these days.”

As an example, the company now utilizes the latest equipment and technologies to produce their products, including a massive Pfauter Profile gear grinder, a Kia CNC boring machine, an Okuma-L CNC turning center, and an M&M Universal CNC gear inspection system. But it still takes a human being to man these systems, Nowlin says. “The computers will do the work for you, but you’ve still got to be able to tell them what you want them to do.”

Although these machines are impressive, indeed, and indispensable in terms of the added accuracy and productivity they provide, Nowlin admits to a certain fondness for older equipment. “We still own the property and the buildings where the company got started, and I lease half of the space to a couple of businesses, but I use the rest of it to store the stuff that I don’t have the heart to get rid of,” he says. “I’ve got some old equipment in the new building, too, but the guys are always after me to get rid of it, just to keep things clean–because that’s another thing we take pride in, running a clean operation. Our place is unusually clean for a big job shop.

“So I’ve tried to sell the stuff I’ve collected, and even to give it away, but I just like having it around,” he says. “I love equipment, and it’s tough to throw anything away, because you never know when you might end up needing it! I’m trying to get better about that, though.”

It would be hard for Nowlin to get any better at some of the more important aspects of running a successful business, however. With more than 50 workers at its Houston facility — and at a time when employees seem to have become expendable, or little more than a commodity — his company can make the proud claim that it has never laid off a single worker. “We’ve had our downturns, just like anybody has, and there have been times when we didn’t have as much work coming in as we’d have liked, but we’ve never had to let anybody go,” he says.

In addition to this, Nowlin places equal emphasis on living up to other commitments: “We pay our bills,” he says, “we’re real conscientious about that. The norm these days seems to be that whoever’s at the top gets paid first, and then if there’s no money left to pay the employees or the suppliers, that’s tough–somebody else gets left holding the bag. But, the way we do it, everybody gets paid before I get paid. That’s just the way it is here.”

As much as the company has grown over the past 51 years, further expansion is in the works. With a customer base including such industries as steel, sugar, cement, marine, mining, pulp & paper, oilfield, petrochemical, and power generation, C-B Gear & Machine has focused its energies on serving customers within Texas and adjoining states, for the most. Additional sales representatives have recently been taken on, however, to allow the company to expand into markets including Mexico and South America. Software programs to enhance job tracking and quality control have also been introduced, to make sure the company’s reputation for providing exceptional service and products is not compromised by its growth.

“We’re also expanding our gearbox repair and rebuilding operation, adding on about 20,000 square feet,” says Nowlin. “And with our new climate-controlled gear grinding room, we’re now able to validate the quality and precision of the gears we produce.” Having watched his company evolve from a two-man operation in a two-car garage into a vibrant and successful enterprise, poised on the brink of further growth, Jack Nowlin’s satisfaction is similar to that his father must have derived at the end of a long, hard day in the shop. “It’s fairly simple,” he says. “I’m proud of the people I work with, and I’m proud of the quality of work that we do.” 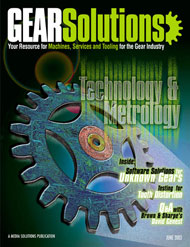