Everyone encounters obstacles, but the real challenge is in whether you cave in or carry on. This profile tells the story of a man who chose the latter—time and again.

Hilton Treuden was not a man who allowed a setback to get him down for long. When one road ended, he simply forged a new course of his own. Strangely enough, the first obstacle he encountered actually involved a road.

“He’d started a greenhouse operation in Milwaukee straight out of high school, selling plants and flowers, and within a year he was doing so well that he bought the building that he was leasing,” says Tom Treuden, recalling his father. “But then the city leveled the structure when it decided to build a new road, so he was back to square one.”

Rather than starting over again in a new location, he decided to enter the police academy, but after 11 years on the force he grew tired of his future being in someone else’s hands, so he realized that it was time to exit that road and find a new direction. He had a friend who worked in a local gear shop, and they decided to go into business for themselves. That’s when Hilton Treuden mortgaged his house, bought his first gear machine, leased a nearby garage, and Butler Gear — named for the Wisconsin city in which it is still found—was born.

Growing up, Tom Treuden spent plenty of time around the shop, washing windows, sweeping floors, and cutting the grass for 50 cents an hour. He joined the company on a full-time basis after graduating from high school in 1974, running a lathe for about three years before moving up to a gear cutter and eventually learning to operate all of the company’s machines. “I spent about 20 years on the shop floor before I moved into management in the mid nineties,” he says, “so there’s nothing here that I haven’t done — and that includes driving the truck and cleaning out the toilets. I’ve always thought that, no matter what your actual position is, you’ve got to be willing to do whatever needs to be done.”

That included stepping into the role of company president the day after his father passed away in 2002. His brother, Lee, who is vice president, grew up working at the shop as well, and after a stint of military service he came on full-time to oversee the company’s production and maintenance activities.

Since its beginnings in a tiny rented garage in 1960, Butler Gear has moved numerous times, most recently into a 46,000 square-foot facility manned by some 50 experienced employees. “It was originally 38,000 square feet, but we soon added another 8,000 to that so we could meet the growing demand for our products,” Tom says. “Our customers have really been good to us, and they’ve supported us, which is a great incentive to do the best work you possibly can.”

It’s also great advertising. “Not a week goes by when we don’t get a call from a new customer who says ‘I’ve got a friend who buys from you, and he told me that I should, too,’” he says, “And this guy might be from New York, down in the Carolinas, in Florida, Texas, or out on the West Coast. So we really don’t need a sales department since the reputation we’ve worked hard to build over the years is working so well in terms of attracting new business. There are a lot of people out there who know about Butler Gear.”

Part of the reason for this is the Treuden’s decision to separate the company from its competitors by offering a maximum range of capabilities. “Some of that has to do with the equipment we’ve purchased,” Tom says. “Anybody can cut a five-inch gear, but not everybody can produce 65- and 70-inch gears, like we can. But we’ve also made a point of excelling at the more complex gearing that nobody else wants to take on. So I think that people have come to know that, if they’ve got a complicated job that they need done, we’re somebody they can trust to handle that—and to do it right the first time.”

Asked if he inherited his father’s green thumb, Tom Treuden laughs and admits that “I can’t even keep a houseplant alive,” but there is something more important that he and his brother have allowed to thrive — their father’s legacy. “And it brings me great joy to know that,” he says. “I know that he struggled, but he always managed to provide for his family, and I’ve learned from his lessons as well as his mistakes.

“People still call us all the time and ask to speak to Hilton, and they’re so sorry when I tell them that he’s no longer around,” Tom says. “But that’s just proof of the kind of man he was—he touched a lot of people, and he couldn’t be held down.” 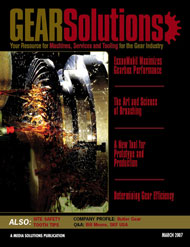