Whether you’re in the market for drive system design assistance or skilled maintenance and training services, this company has solutions to the challenges you face.

It was the early seventies, and after six years spent working as a high-speed gearing specialist for a company on the West Coast, John B. Amendola, Sr., knew that change was in the air. End users of high-speed gears were experiencing a rise in gear failures, and he wanted to work with a company that he could respect and trust. Unable to find a domestic company that struck his interest, he finally decided to approach MAAG, the machine tool manufacturer based in Switzerland.

“They weren’t really involved in much of the high-speed gearing market, but they liked being engaged in unique applications so they could apply the experience to their machine designs and keep them on the cutting edge,” he says. “They didn’t have U.S. representation at the time, so I convinced them to let me use my connections to help them establish a foothold. I became their agent in North America, and our relationship lasted for the next 35 years. They’re not in business anymore, but their remanufactured shaper cutters are still very popular. ”

That relationship was also the foundation for Artec Machine Systems, which Amendola founded in North Branford, Connecticut, in 1972. The first 10 years were spent making inroads with U.S. customers, designing custom drive systems that were then manufactured by MAAG. The business began developing its reputation for tackling complicated installations, designing drive systems for demanding and highly specific applications.  Construction on the company’s current facility began in 1983, and it was around that time when Amendola realized it was time to establish a service department. “In addition to designing gearboxes, customers were asking us to examine drive systems that were giving them trouble, doing forensics to identify and correct the problem, so we were working on all kinds of gears and gearboxes at that point, and the service center in the new building gave us room to do our work.”

With each passing year the company’s capabilities grew, especially those having to do with its range of technical services. In addition to rebuilding gearboxes and testing them on its API-rated test stand, Artec also offers field services including periodic maintenance inspections, condition reporting and analysis, onsite overhauls and gearbox repairs—including bearing/rotating equipment replacement—vibration analysis and diagnostics, and failure analysis. Other services include gear failure prevention, gear repair analysis, new gearbox installation and commissioning, and specification review and design upgrades.

Marine applications have become a new market for the company in recent years, especially in light of its involvement with propulsion systems for the U.S. Navy. The economic downturn of the early eighties convinced Amendola of the value of market diversification, so he has worked hard over the years to balance the company’s activities among a healthy selection of industries. In addition to the military and commercial marine market.

Artec is also involved in high speed oil and gas transmission, heavy duty cement, power generation, ski lift drives, polymer and plastic, pharmaceuticals, and the food industries. “We’ve worked with customers including General Mills and Malt-O-Meal repairing their extruder drives,” he says. “You’d be amazed how many there are in your average food processing plant.”

Amendola says that he and his colleagues have worked hard to position Artec Machine Systems as the “go-to company for challenging installations and applications.” As an engineering design and maintenance services provider, the company has relationships in place with RENK-MAAG, Euroflex Transmissions, Kissling, and a number of high-precision loose gear manufacturers around the world.

“We’re not interested in commodity gears or standard drive system designs,” he says. “There are plenty of companies out there doing a fine job with that. What we’re able to do is sit down with a customer who is faced with a challenging application and provide solutions, whether that involves designing a new system from scratch or examining existing drive systems to determine how they can be upgraded and enhanced. When there’s an engineered product involved, we’re the company to call.” 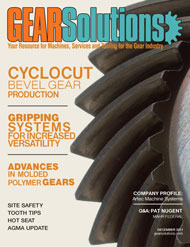